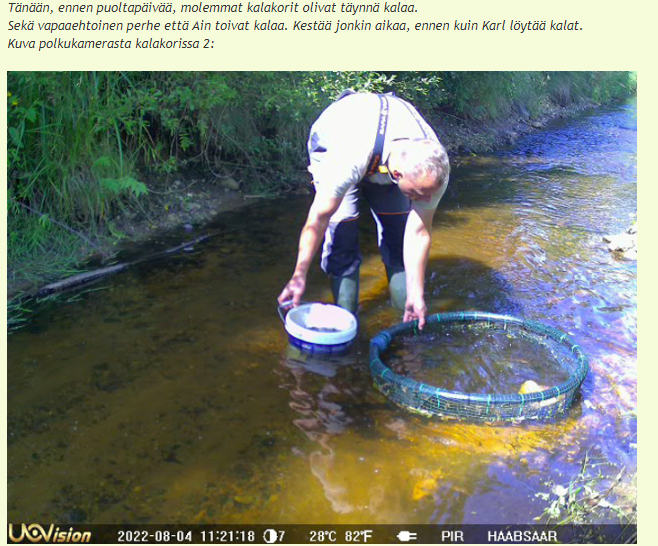 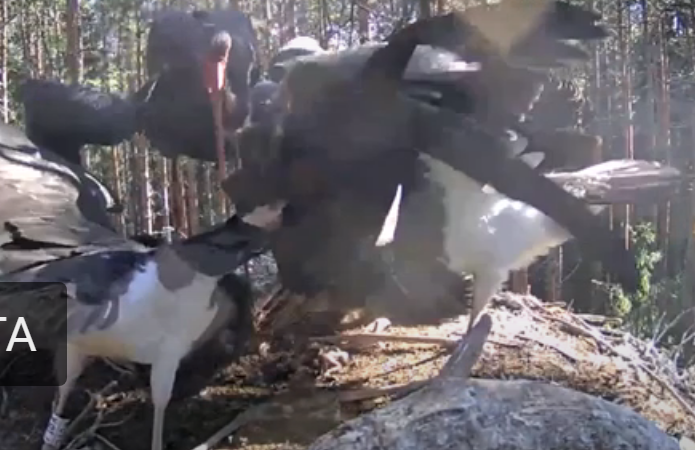 Two nights I spent at fish basket 2, to see directly, what happens there at baskets in mornings. According trail camera pictures it seemed that Kaia ate quite a lot from basket, but did not fly away from basket. Simply stood nearby and ate again. So she did not feed chicks so much as possible.

That initiated in my head the wish to try to trap Kaia, just before she starts migration. In first morning both Kaia and Karl were at basket together, even ate same time fish from there. They were not completely friendly, but not such hostile like against herons. It was a bit surprise for me. As I did not see, if Karl was there all the time or went away with fish - I did not release the trap, did not want to frighten both adults. So they ate all fish in basket by 6:30 and soon left both. So I bought next fish and went to sleep. Next night again to the basket 2, with fresh load of fish. In 7th Aug just before sun raise Kaia was alone at basket, ate few tens of fish and flew to the nest. Soon returned, stepped into basket and I did not hesitate to release a trap. So she was caught.

Together with (informed through phone) Madis, Margit and Ain we installed the transmitter and after hour and half Kaia was released. She flew about 1km of release place, stopped on retention tree and spent first day in that area, sometimes on trees and sometimes walking in stream. Think, to get rid of stress caused by close by humans after trapping. Though, her head and eyes were closed with help of special hood. Next day she behaved already normally, visiting more feeding sites. Probably for frogs.

Today, before noon Kaia started migration. In about eight hours she covered 350km and stopped for night in Belarus.
More information will be in migration map, if I can find time to update it.
sulina Lisätäänpä tietolähde kun suoraan LK:n sivuilta siirrät