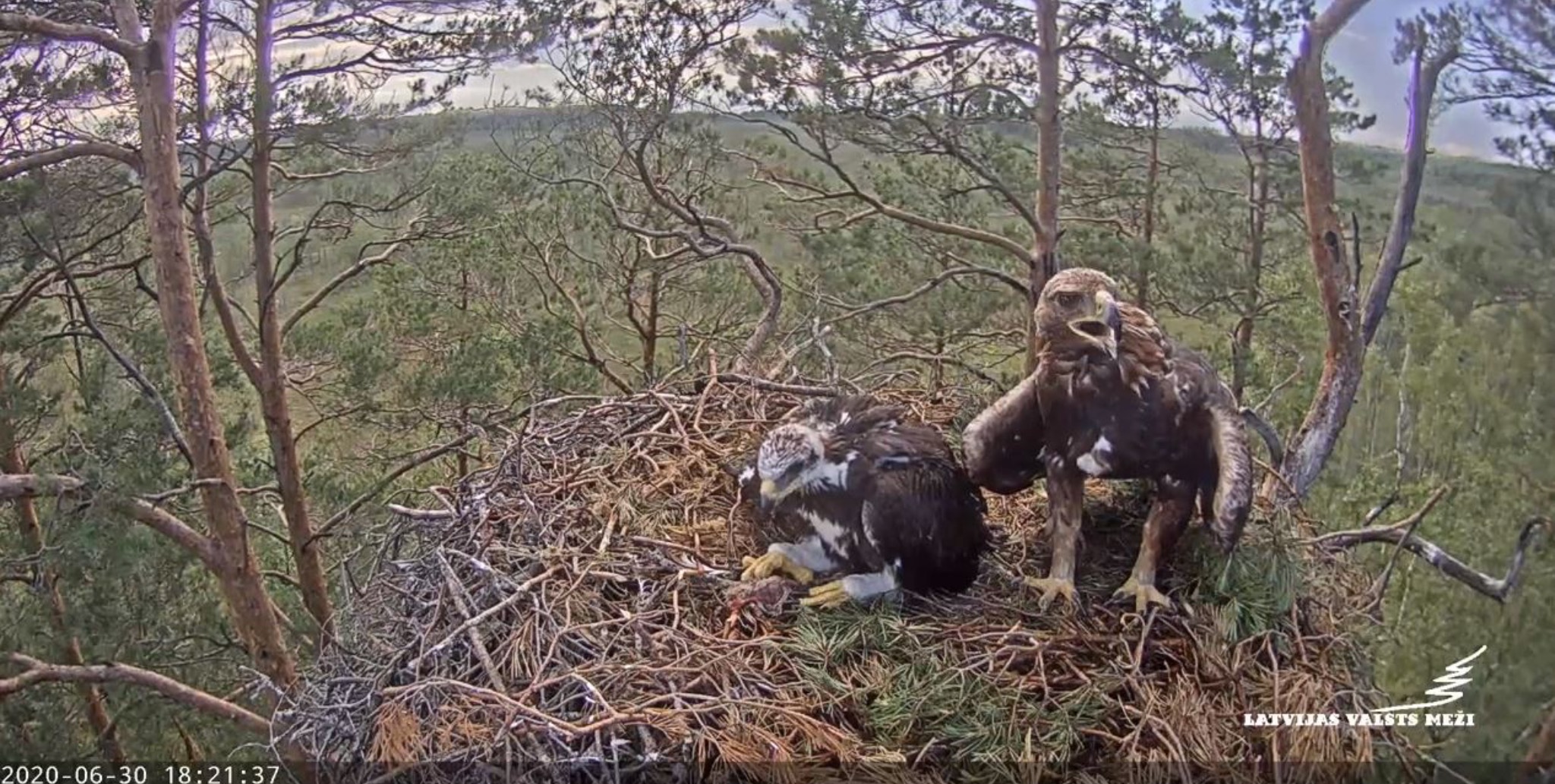 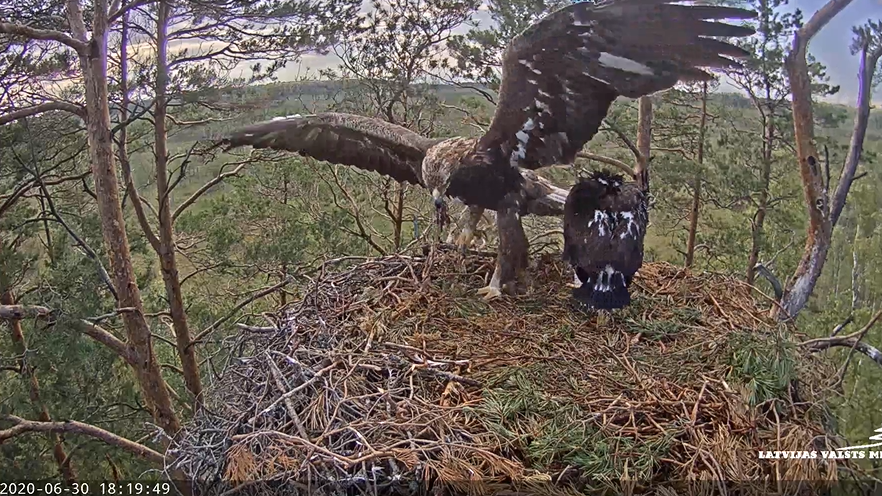 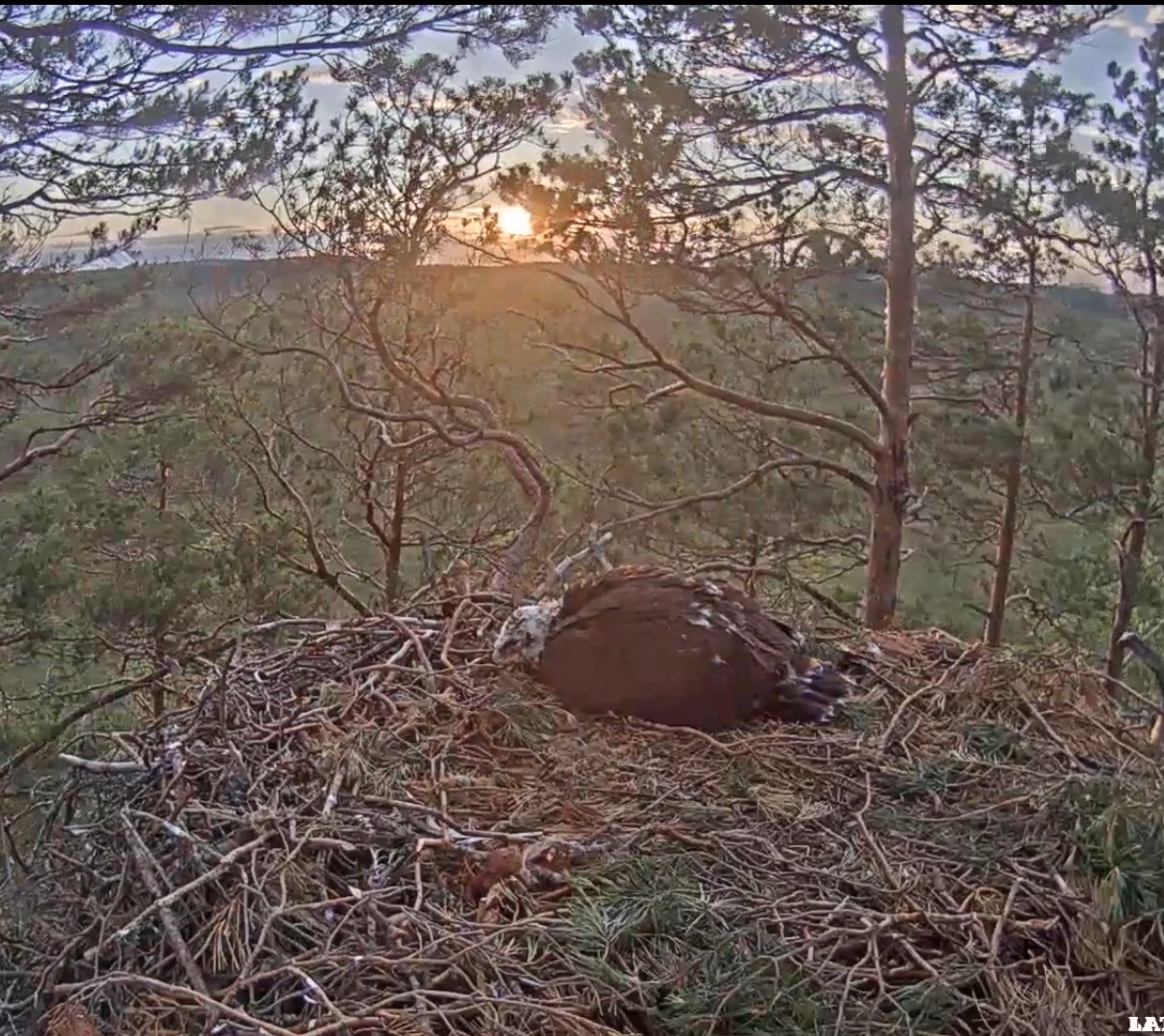 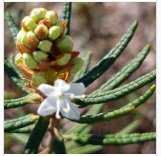 Ugis Bergmanis Latvian foorumilta:Good morning, Watchers! The rock did not last a week without enough food. When Spilve brought a piece of meat yesterday, the eagle was already powerless and it was clear that he would not wait for the morning. Now the female Spilve has to think about her survival, hunt where food is available, gather strength for the next nesting season. The pillow has to wait for the return male male or wait for a new male. My observations show that already in August, rock eagles start building a nest for next year. Will the eagles choose this nest again, time will tell. Summarizing the events of the last week - the main food supplier, the male Virsis, last brought food on June 22 - two baby cubs and an adult ruby, there was no evidence of a lack of food. In the absence of the male, the female could not find enough food near the nest for the young eagle to survive. It is clear that one adult bird cannot feed a baby. It is very possible that the heather has died. Removing the new eagle from the nest would not have been correct. Such an activity would also require a permit, would take time and would not be justified. We waited for the male to return every day. Knowing that the female Spilve is staying near the nest, in such a situation to remove the new eagle from the nest, we would be in Spilve's perception of the nest destroyers. Doing so could provoke leaving the nest. If the young eagle were removed from the nest at night, it would have to be bred in captivity and released into the wild in late July. However, in August and September, young eagles are still fed by adult birds, no longer in nests, but in the wider area. If there is not enough food in this particular bog this year, the young eagle would not even survive. It is a known fact that most young birds of prey die, mainly in the first year of life. Rock eagles are no exception. In my research practice, I know of two cases where my ringed rock eagles were later found dead under nests. I remember a similar case with the little eagle, when on July 5, 2000 I found a dead adult male of the little eagle near the nest (the male was identified by a ring, it was previously caught in the nesting area and ringed). At that time, a month-old young eagle was in the nest and did not survive. On the success of rock eagles in Latvia in 2000. Overall, this year is relatively successful for the species - including our video surveillance nest, six nests have young eagles, two of them even two young eagles! Two young eagles in one nest in Latvia are observed in 8.3% of successful nesting cases, but, not every year, it is a great rarity. Although this is a sad event, let's be happy about what we have - a strong eagle grows in the nest of little eagles in Aizkuja. In the nest of the Aizkuja mouse kite, one kite has already flown out of the nest. The youngest kite is still staying in the nest, the sick eye has completely healed. We are also waiting for the return of Spilvi and the other eagle.